The Bird on the Crossroad

Why did the bird cross the road?
To get to the other side.

So why did the bird decide to cross the road?
It won’t know. It just knows it needs to cross it.

Posted by JamooliLuV at 3:20 PM No comments:

Posted by JamooliLuV at 12:17 AM No comments:

Posted by JamooliLuV at 2:28 AM No comments:

Posted by JamooliLuV at 2:18 AM No comments: 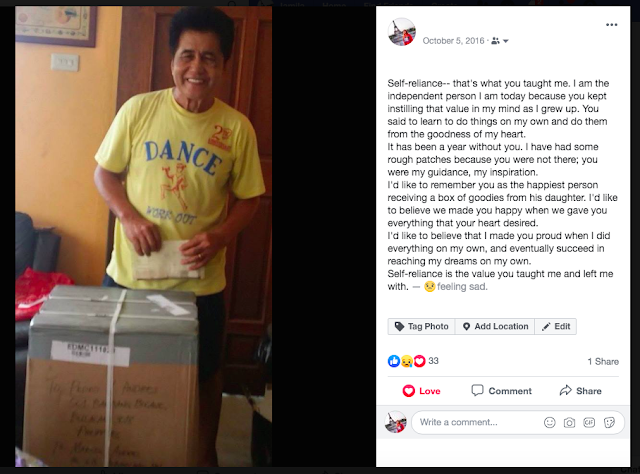 That day,
That date.

I'm a Child of the Sea

Posted by JamooliLuV at 8:54 AM No comments:

The fruits and blooms that surround me remind me of the bountiful blessings that I have been receiving in recent years. I especially thank God for giving me a stable career that is highly-cherished, admired, and respected, and can make me earn several times more than I could be getting in my home country.
“I may not have everything I want, but I have everything I need.” And maybe much more than that because of the things and opportunities that have been making my life a bit more lavish and convenient, compared to my contemporaries. I thank God for my Son who has been constantly making me proud, despite my very minimal presence and guidance. He is a consistent honor and a model student; I am far from being a model Mom. I thank God for my life-long partner. My husband may not be perfect, but he is perfect for me. He has saved me from loneliness and has always been my strength and motivator. I was orphaned quite early and that thought makes me feel sad periodically, but the presence of my husband and the solid support of my family members in my home country and across the globe fill whatever void and longing I have inside my heart for my Mom and Dad.

I certainly get upset and wronged too, you know, as I have some goals I feel I have to achieve, but my hands are tied; I feel rushed to strike when the iron is hot, but the sand in the hourglass is getting dissipated at such a fast rate--I am afraid I cannot keep up with it. And when things do not go my way, I just look at the fruits and blooms, and I smile with a grateful heart.
Posted by JamooliLuV at 6:45 AM No comments:

Love That Stays And Love That Lets Go (A translated text)

I remember before when my teacher said, "There are two types of love: love that stays and love that goes and comes back." Then she asked the class, "Which one is real love?' All of my classmates answered, "The one that stays!" Our teacher just smiled and she told us a story. She said, "There were two pairs of lovers. The first pair loved each other so much. The type that wouldn't let go of each other. The other pair believed that love isn't just about holding on and they could both let go for them to be a better person for each other. One day, the two pairs got involved in a vehicular accident between a bus and a truck. The bus where they were riding fell off the cliff. The two ladies were in the brink of death hanging by the cliff, holding on to their loved one's hand. The first pair who couldn't let go of each other continued to hold on. The man wouldn't let go of the woman's hand because he was too afraid that she would fall down to her death the moment he let go of her hand, although he knew that he couldn't hold on for so long. He really tried till the very end until he could not anymore. The woman's hand slid off of his hand and fell down. The second pair, on the other hand, knew the meaning of the words letting go. That's why the man told the woman to let go and hold on to the roots of the tree because he knew that he wouldn't be able to hold on to the hand of the woman for long. He promised to go back. Despite the impending the danger, the woman trusted the man. On his return, he had a rope with him. He used it to help the woman he loves and in the end was able to rescue her. Now you tell me, which love is greater? The one that stayed holding on although they couldn't anymore, or the one that went and came back because he knew how to really hold on to her and save her?" Silence. No one could answer.
My teacher's story taught me a lesson: If someone leaves you and tells you reasons such as "I will find myself," or "I want to change for you," or "I'll make myself better," you don't have to believe them. Just believe that they really love you when they came back for you because the only way to know if a person really loves you is to set them free. They are like street dogs; let go of them and they will come back to their real home. If they really see you as their home, they will be back at the right time. Don't be selfish that you will hold on to it till the end just because you think it's true love. Not everyone that stays is real, and not everyone that goes isn't genuine.
***Originally written by Glydel Sual; translated by yours truly. 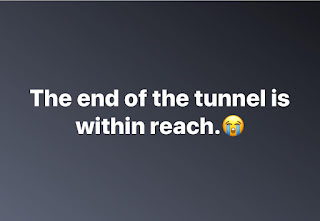 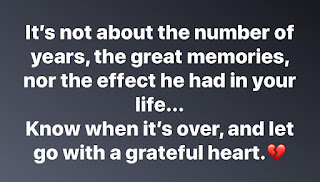 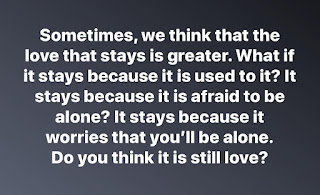 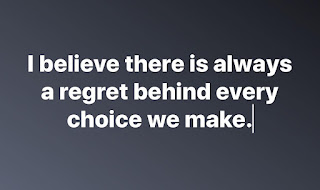 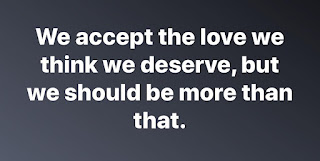 Posted by JamooliLuV at 5:52 AM No comments:

Posted by JamooliLuV at 4:15 AM No comments:

I Have Always Honored Her

My winning essay being posted on the front page of the Philippine Daily Inquirer, my country's number one broadsheet, has got to be th... 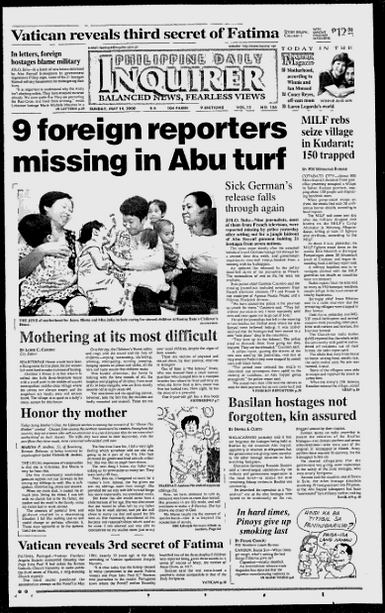 POPULAR POSTS (You loved these posts!!)